At the end of the day you will have an amazing collection of artefacts the children have made, to create your own Egyptian museum.

Tutankhamun's gold coffin, made in the workshop 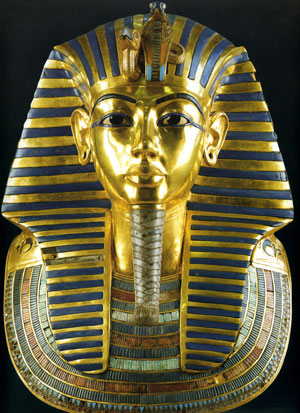 Yorkshire and Humber region: contact Rachel Bushby on 01904 890 122, or email her at rachelbushby@hotmail.co.uk

Pyramid posters and papyrus sheets for sale at workshops

Teachers' comments: 'The children had a great time and learnt a lot' (click for more reviews)

Preparing for the Pharaohs Workshop

Tutankhamun's gold dagger, made by a y4 child

The Wonders of Egypt

There is nowhere on earth like Egypt. For thousands of years tourists have been astounded by its beautiful temples and tombs, its vast pyramids and its golden treasures.

This workshop focuses on what the ancient Egyptians cherished most - their pharaohs and their gods. Most of the amazing sights in Egypt are in some way related to these two. Pyramids were giant rock tombs designed to send the pharaoh up to heaven, and temples were sites of worship for gods, adorned with hieroglyphs proclaiming the greatness of the god and of the pharaoh who built his house.

My Egyptian workshop has been very popular since 2004, for several reasons: the enthusiasm and depth of knowledge which I bring to the day, the in-depth tuition on the intricacies of hieroglyphs, art and other aspects of Egyptian culture, the high quality resources and creative activities which children love, and which provide a rich learning experience about ancient Egypt as well as teaching art skills, and the fantastic outcomes which you can display in the classroom.

Detailed lesson plans are provided on this page. 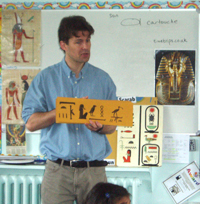 how to read hieroglyphs 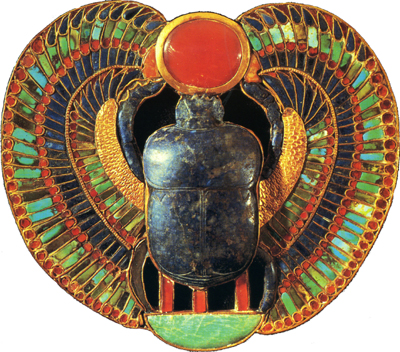 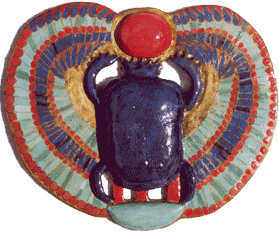 Copy of scarab pectoral shown in the afternoon 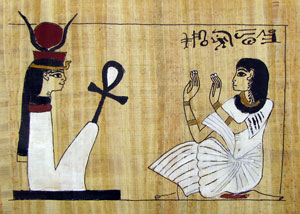 Papyrus painting by a year 4 child 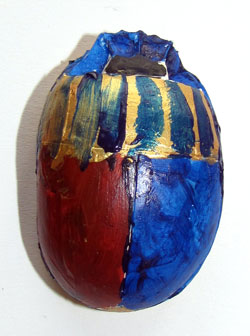 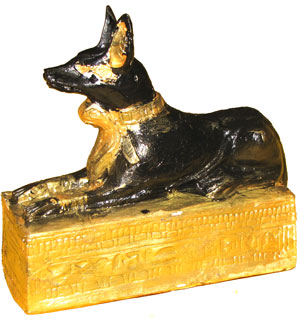 Obelisk made by a year 5 child

Learn about famous pharaohs by looking at photos. We begin with Tutankhamun - his treasures, his tomb, his body, and why he is famous. Children will see the actual stones used by the Egyptians for jewellery (e.g. lapis lazuli, carnelian, turquoise).

Depending on time, we also look at Khufu and the pyramids, Hatshepsut the female pharaoh, and Rameses II. Children can win papyrus bookmarks for answering quiz questions (e.g. what are these artefacts found in Tutankhamun's tomb, why is he famous, why were the pyramids built).

If you prefer we can focus on the gods (you can decide on the day):

Gods: look at paintings of 8 gods (Anubis, Osiris, Isis, Horus, Hathor, Thoth, Ra, Amun). Learn their names, what they look like, and what they were god of: e.g. Osiris is shown wrapped up as a mummy because he was the ruler of the afterlife, and holding a crook and flail because he was god of farming. 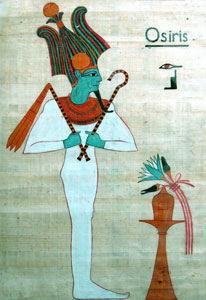 Next we play a name the god game, looking at 20 photos of gods (paintings or statues) on the interactive whiteboard. Each child takes part using a whiteboard and pen. The children with the highest score get a prize - either a poster or a bookmark.

Children learn about hieroglyphs, by writing them on a worksheet (see below) and on a piece of real papyrus. They also play reading games, with more papyrus bookmarks for prizes. Depending on your preference, we can focus on hieroglyphs related to pharaohs or to gods.

Words - up to 20 words are copied, including words such as god, king, and lord, as well as words which are parts of pharaohs' names (e.g. ankh in Tutankhamun). A game follows in which children translate hieroglyphs (this section may be omitted if time is short)

Gods' names - children copy the names of 8 gods. A game follows in which photos of hieroglyphs (from tomb or temple walls) are shown on the whiteboard and children have to spot them, with more papyrus bookmark prizes. 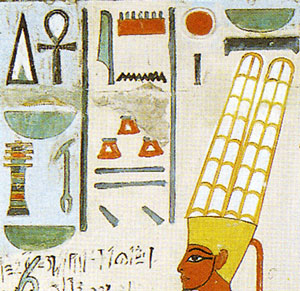 Picture used in the reading games

Pharaohs' names (if time allows) - learn how to read pharaohs' names (cartouches), which are usually made up of a god's name, words, and letters. For example, Tutankhamun contains the letters T-u-t, the word ankh, and the god Amun, and it means 'the living image of Amun'. A game follows in which children try to read a pharaoh's name (e.g. Rameses).

Tutankhamun's name (written on one of his beds)

Write on papyrus - children get a piece of real papyrus paper (6x15cm) and write any hieroglyphs they like (e.g. a pharaoh's name, god's name, their own name). They use a black ink pen, because the Egyptian used black ink. 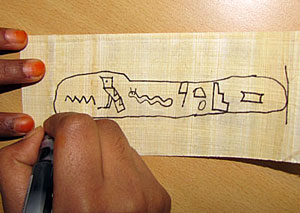 If you book a workshop I will email a letter to let you know what resources we need (basic things like paint palettes, pots for water, table covers, painting shirts, and paper towels). 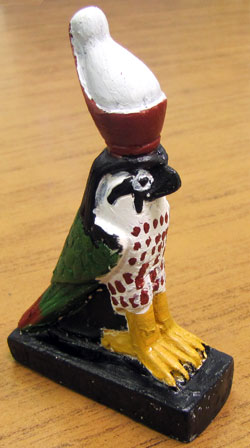 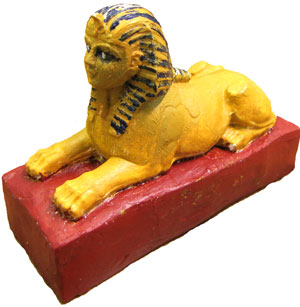 Sphinx painted by a year 5 child

One boy and one girl will be chosen to dress up as Egyptians, with linen clothes (a dress for the girl and a kilt for the boy), plaited wigs, jewellery (bracelets and necklaces, including a replica of a princess's collar with over 1,000 beads), eyeliner, and lipstick and blush for the girl. A permission slip will be provided for children to wear the make up.

The children can also try frankincense perfume (unless they have skin allergies or a nut allergy). 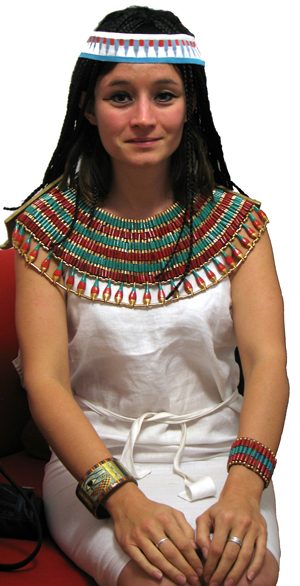 My wife Catherine modelling the clothes, wig and jewellery

Lunch Break - Over lunch I will set out materials to make the artefacts in the afternoon. I will send you a form when you book the workshop to write down which children make which artefact. I will need two children to help me set things out.

Children see a variety of artefacts relating to pharaohs, gods and the afterlife. The artefacts are copies, most of which I made myself. You can see photos of them on this page and here. This activity teaches children about the items and their meanings, and will inspire them to create their own works of art.

Artefacts include: statuettes (gods, a pharaoh, sphinx, scarab beetle, shabti, Tut's coffin, Tut's mask), Tut's scarab pectoral, a pharaoh's bracelet (see below), Tut's dagger, a papyrus painting (the weighing of the heart scene), a relief of a pharaoh and Ra, and an obelisk. 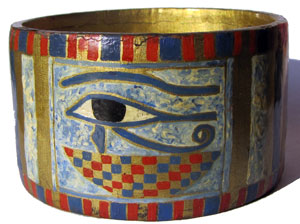 Copy of bracelet belonging to the pharaoh Shoshenq

I will give a short lesson on how to paint accurately with acrylic paint (e.g. dry brush after washing it, correct mistakes, keep hand steady by resting it on the table, only touch with the tip of the brush).

Then children will make an artefact. These will be similar to the ones I have shown them. Each child has his or her own artefact. There will be up to 14 different artefacts in all, which means you can make a very impressive museum display. 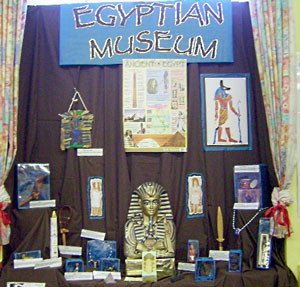 The methods and materials have been carefully designed so that children can make artefacts of high quality and durability. They are also differentiated by difficulty level so you can assign a suitable task to each child. Photos of the artefacts are shown here. 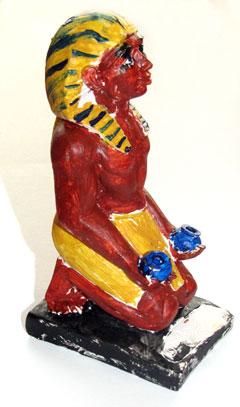 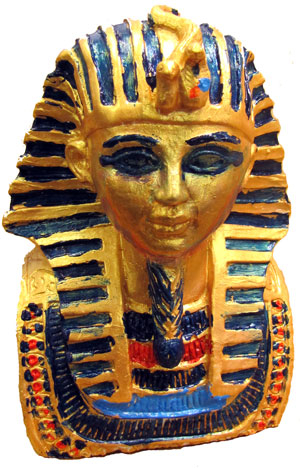 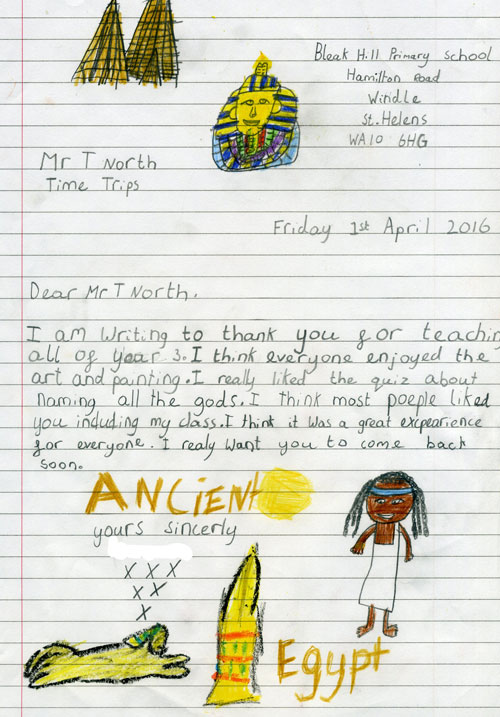 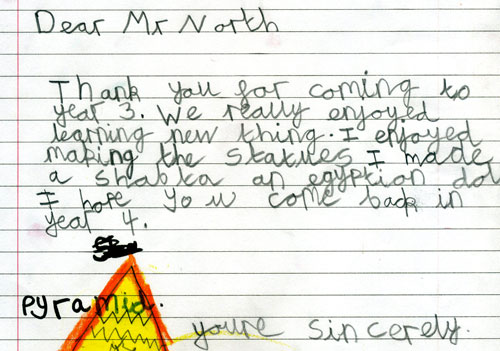 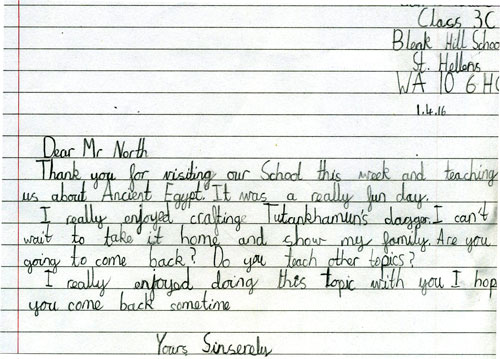 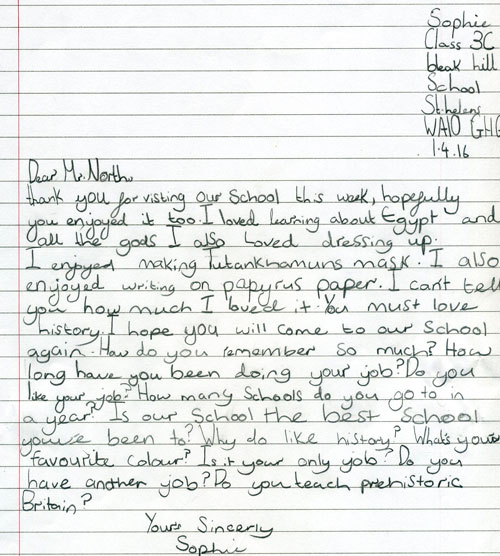 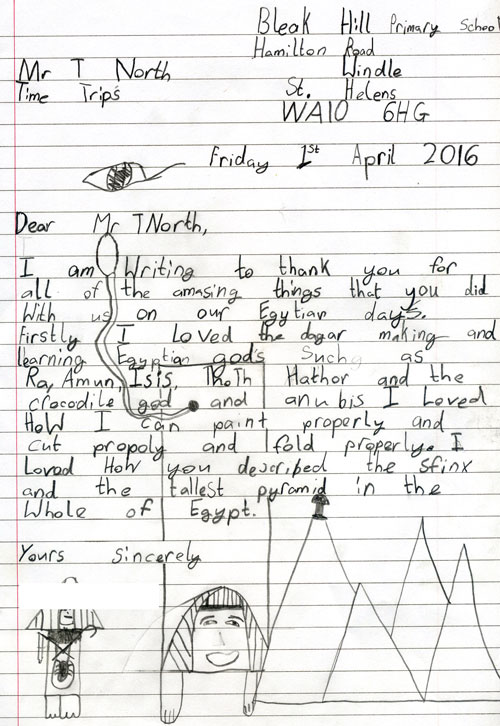